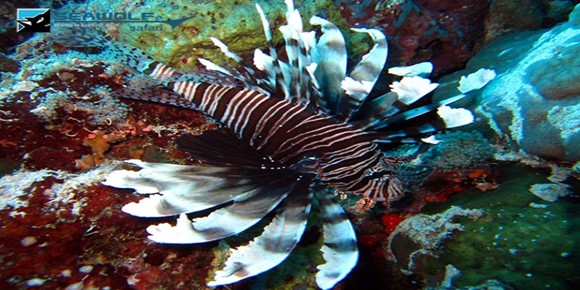 Coming from the north, this island forms the entrance to the reef area of the southern Suakin group. The visitor will find dive sites that are home to magnificent underwater flora and fauna that could hardly be more breathtaking in the Red Sea

Masamirit is about 0.8 nautical miles long and covered with green bushes. On the south end stands a 29 meter high lighthouse. At night its light can be seen up to 15 nautical miles. On the west and south sides, the reef drops steeply to great depths. At the north end and on the east side there is a plateau where the underwater life can be observed in all its glory. Due to the predominant north current, the west and north sides are more interesting for diving. Near the island, the seabed reaches depths of more than 350 meters.
North plateau
At a depth of 3 meters, a shallow plateau joins the northern side of the island. On this area covered with coral heads there is a lot to discover: Parrot fish and tobacco butterfly fish sway to the beat of the swells. On the outer edge there is a steep slope. It is beautifully overgrown with stone and soft corals. Schools of banner fish pass over the corals. The outer wall offers the opportunity to encounter a variety of pelagic marine life. Schools of tuna as well as single blacktip or scalloped hammerhead sharks make appearances from time to time. Large fan gorgonians grow on the steep slope, catching plankton from the water with their polyps.
East side
The outer wall is slightly curved inward and drops steeply to great depths. The upper area is craggy and crisscrossed by many small caves and crevices. Small reef dwellers seek shelter in these. Schools of various snappers and spiny mackerels move along the steep wall. Schools of vermillion seabass are gathered around small ledges. In the middle of the eastern side, a plateau stretches into the open water. Its base begins at a depth of 20 meters and quickly descends to 40 meters. A coral garden has developed on the plateau.