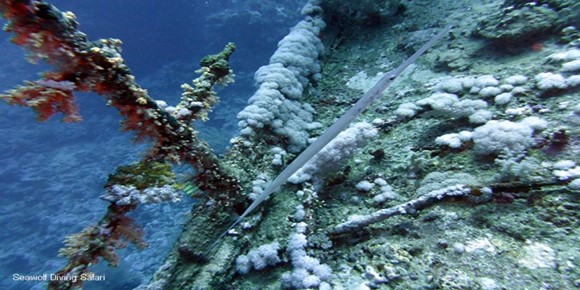 Originally intended for the Egyptian Port and Lighthouse Administration, she was later used for ferry and supply work in Egyptian ports.

The AIDA was to provide supplies for the Egyptian soldiers who were always stationed on the southeast coast of Big Brother Island on a bi-monthly basis. She carried fresh water, food and the next guard shift.

On September 15, 1957 in a heavy storm, the captain, ignoring several warnings, decided to go anyway and tried to moor at Big Brother. He struck the reef.
The AIDA began to sink rapidly and the captain had no choice but to abandon ship with his crew. A lifeboat was able to be lowered and all 77 sailors were still safely picked up and set down on Big Brother before the AIDA sank.

The dive on the AIDA is an extraordinary dive, no matter how much experience you have as a diver. It leaves you wondering how a ship can sink like that and stand on the sloping reef edge, as if parked. Since the ship no longer contains any cargo, one suspects that this has slipped through the wreck and now lies in deeper regions on the ground. Same as, the AIDA stands bolt upright on the sloping reef edge, the highest point at 25 m, the screw at 57 m. Apart from the collision with the reef, the ship is still completely intact.

It has been there for more than 40 years now and is becoming more and more part of the reef, overgrown with corals.